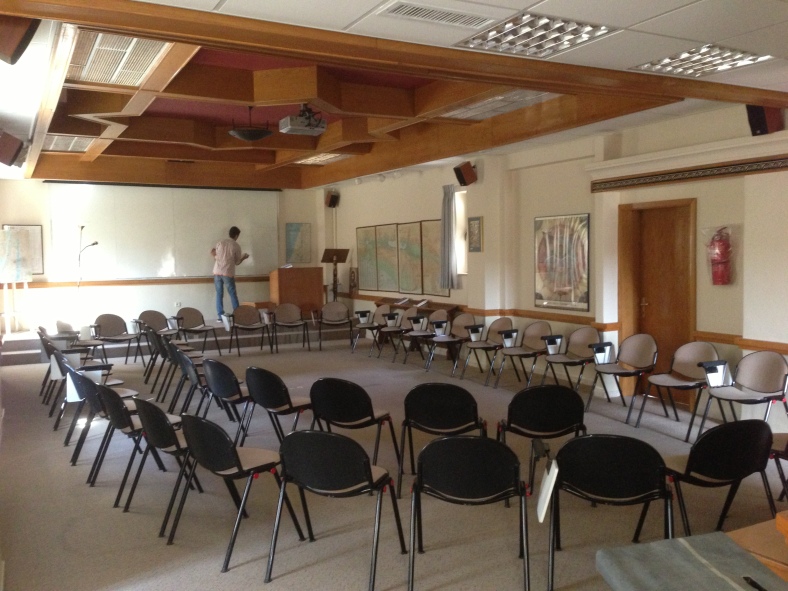 We have just completed our first 1-hour lecture for our Palestine of Jesus class.  Fr. Kamal Farah is our professor and friend and taught us many many things in just that one hour.  Among them were:

God is present at all times in all places.  We do not bring God with us.  God is already in the places when we get there.  Abram experienced this when he was met by the High Priest of God Melchizedek in Genesis 14.  God was already in that place, ahead of Abram.  We must remember that.  God goes before us, inviting us to all places where God is already present to do the work that God is already doing there.

This is very important for Pilgrims who come to Jerusalem and want to “rush rush rush” to see everything right away.  Many who come go right to the High Holy places without taking time to “stand in the gates of Jerusalem” (Psalm 122).  When we don’t take the time to rest in God’s presence and instead want to press forward because “God has called me to do all this work” we do not understand the Way of God.

The Temple is (and was) the center all of Jerusalem.  The fist Temple was commissioned by King David in 1,000 BC and built by Solomon around 950 BC.  The Temple was many things to the Hebrew nation.  It was the one and only physical representation of God’s covenant with God’s people.  It served as a reminder that God is always among God’s people.  It served as a military center as well.  But it was also the only place where the priests could offer sacrifice in order to renew the covenant God had made.  (that last part is very important)

The first temple was destroyed in the 580’s BC then rebuilt in 516 BC.  Jerusalem was then occupied by the Greeks in 333 BC.  Macabees re-occupied Jerusalem around 160 BC which is why Hanukkah is celebrated.

(stay with us here)

In 63 BC the Romans overtook and occupied Jerusalem and placed their representative, Herod, there in 37 BC.  It  was then in 70 AD when the second Temple was destroyed.  It was never rebuilt.

Remember, the Temple was the ONLY place in which the priests could renew the covenant with God through sacrifice.  Wouldn’t it be Good News if God were to actually BECOME the very sacrifice that created a New Covenant with all people?

3 thoughts on “Our First Lecture…”