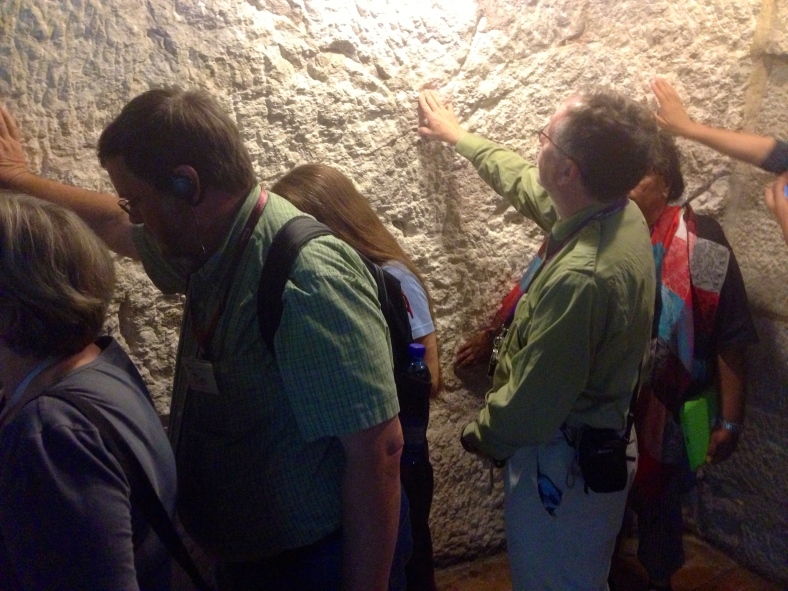 this is the base of the rock that is Calvary. it’s in the basement of The Church of the Holy Sepulcher. after you touch and pray at this rock, you walk up 3 different flights of stairs to be on top of Calvary

We were everywhere today!  We spent time on some of the holiest of ground for all three of the Great Abrahamic Faiths: Islam, Judaism, and Christianity.  Yes, in case you didn’t know, all three of the major world faiths trace their roots to Abraham who worshipped One God. (Genesis 15)

Our first stop was at The Dome of the Rock, which is the 3rd most holy place for Muslims.  Our professor, Fr. Kamal Farah, walked with us all through the grounds, teaching us about the different elements of the Islamic faith.  We were stunned to learn (or at least some of us were) at how many times Jesus came up within the Muslim faith.  Of course, Muslims do not recognize Jesus as Messiah (nor do those in the Jewish faith) but Muslims BELIEVE in Jesus.  They believe in Mary (and she is the only woman mentioned by name in the entire Koran).  They believe that Jesus will be the Judge on the Last Day.  They believe that all the prophets who have gone before are currently listening to just one other prophet tell them about the scriptures and that is, you guessed it, JESUS!!

None of us are saying that there’s no different between Muslims and Christians. That would be ridiculous.  But many of us thought it very interesting to keep hearing the Name of Jesus brought up again and again in a Muslim context.  Here are some photos of the Dome of the Rock. 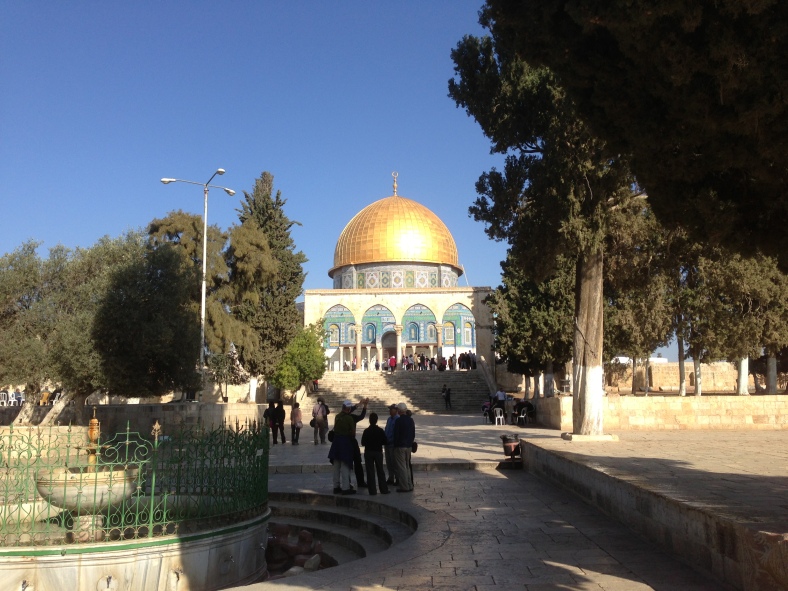 We next went to The Western Wall, or as it’s also called, The Wailing Wall.  This is the most holy spot in the world for people of the Jewish faith.  In their story, God was and is most present in the Holy of Holies inside The Temple.  The First Temple was built by King Solomon in the 950’s BC but then destroyed in 586 BC. The Second Temple was then built in 516 BC and stood all the way until 70 AD when it was destroyed by the Roman Empire.  All that remains from The Second Temple is the Western Wall which is what is now The Wailing Wall.  Jewish people from around the globe come to say prayers at the Wall, praying for the coming time of The Third Temple. 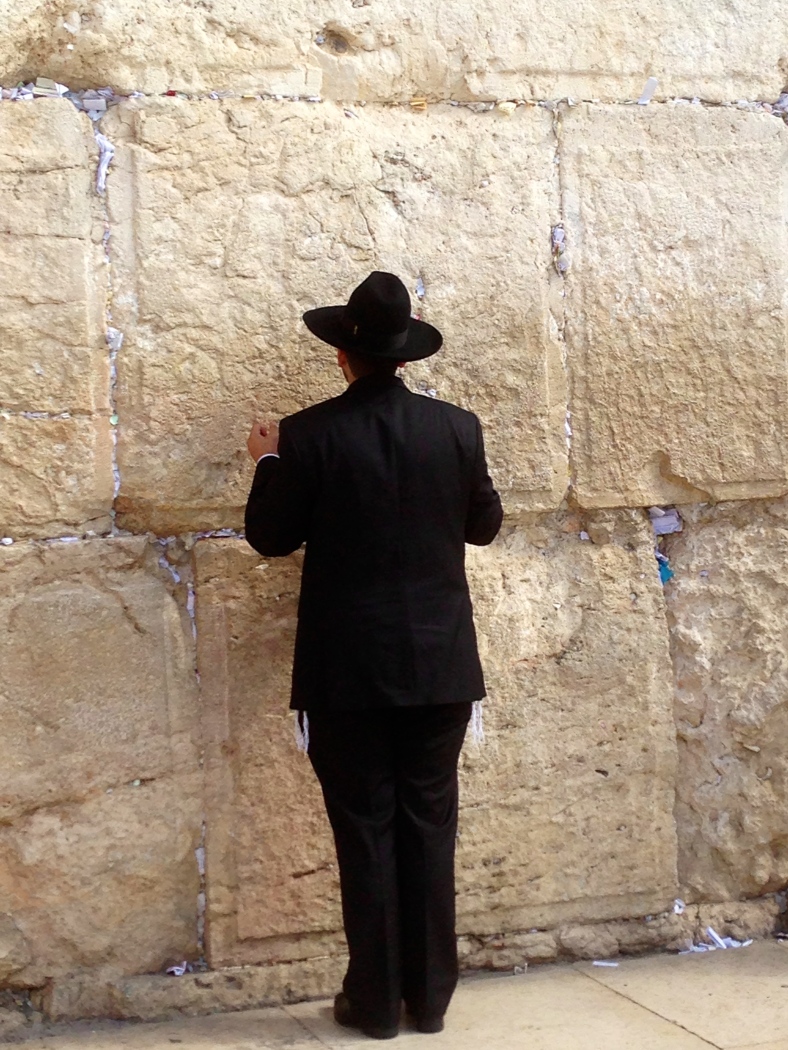 After that, we went to the Pool of Bethesda, the spot where Jesus healed the man who couldn’t walk and had been sitting by the pool for 38 years.  (John 5:1-15) This pool dates back to 3,000 BC.  It’s more than 5,000 years old!!  (which is only half as long as the city of Jericho has been around!)  This was another one of “those spots” where we KNOW that Jesus actually stood.  Many other places in the Holy Land are “traditional sites” meaning, it’s not the exact spot where something happened but it’s close so we just put up a monument or a church to commemorate the event.  But, like the well where Jesus met the Samaritan woman, this pool is a place where Jesus actually stood.

ruins of the upper levels of Bethesda Pool

Just next to the Bethesda Pool is St. Anne’s Church which has possibly the best acoustics of any church we’ve ever heard.  We recorded our group signing a few songs but we haven’t gotten it from the iPhone of the gentleman who recorded it. Here’s a clip of another group singing.  LISTEN TO THE ACOUSTICS!!!  (click here) ((it’s only 2 minutes long))

We had lunch and then moved on to The Church of the Holy Sepulcher.  This place is ENORMOUS!  It houses 4 key sites for Christians.

1) Calvary, where Jesus was crucified
2) The spot where Jesus’ dead body was presented to Mary
3) Jesus’ tomb
4) The garden where the resurrected Jesus first appeared to Mary Magdalene

All of these sites are each within a 30 second walk from each other, and some even less.  And all have been commemorated in grand ways with candles and gold and lights and altars and more.  It’s beautiful but it’s also so busy and so active that at times, it’s hard to really “get into it”.  There were SO MANY people there who have their own spirituality to draw close to Jesus.  And every language you can think of. All of them coming to engage with God through Jesus.

hand on the rock which forms the base of Calvary 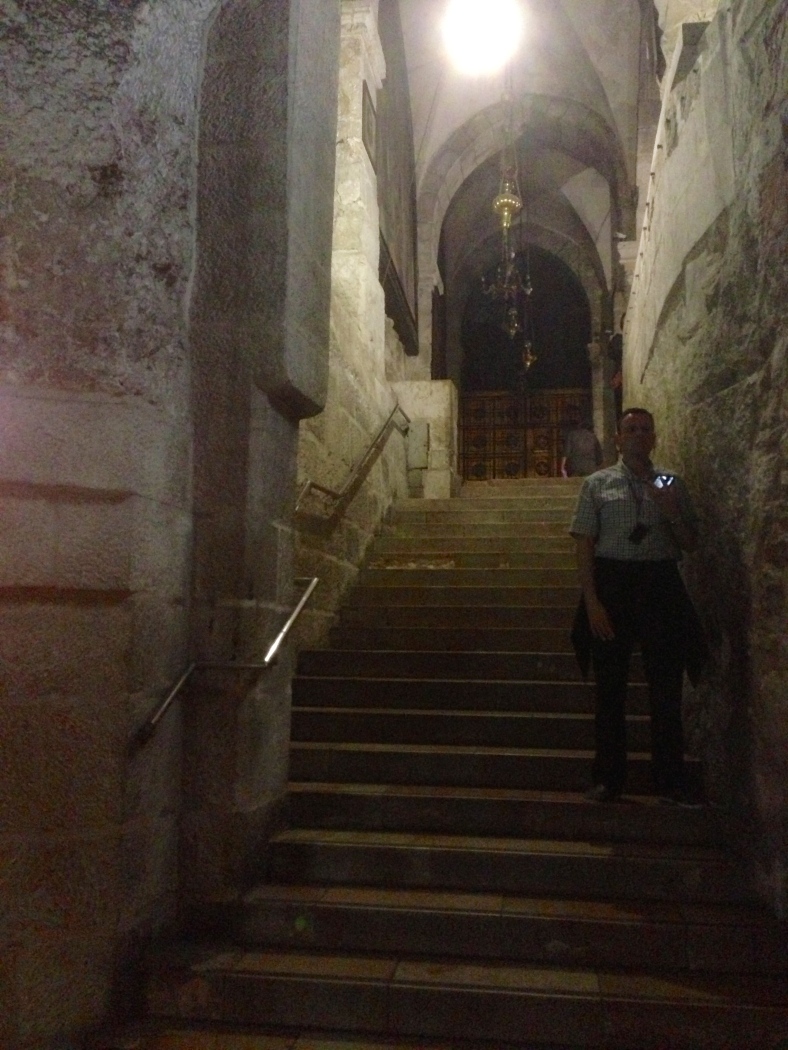 first set of stairs heading up towards Calvary 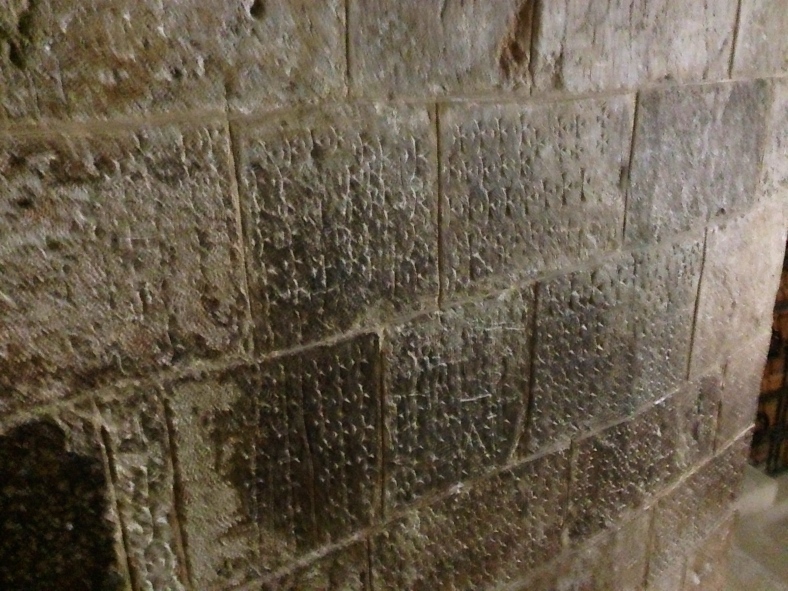 all along the walls as you go up the stairs, there are MILLIONS of crosses that have been carved into the stone by pilgrims over the centuries

another set of stairs up to Calvary 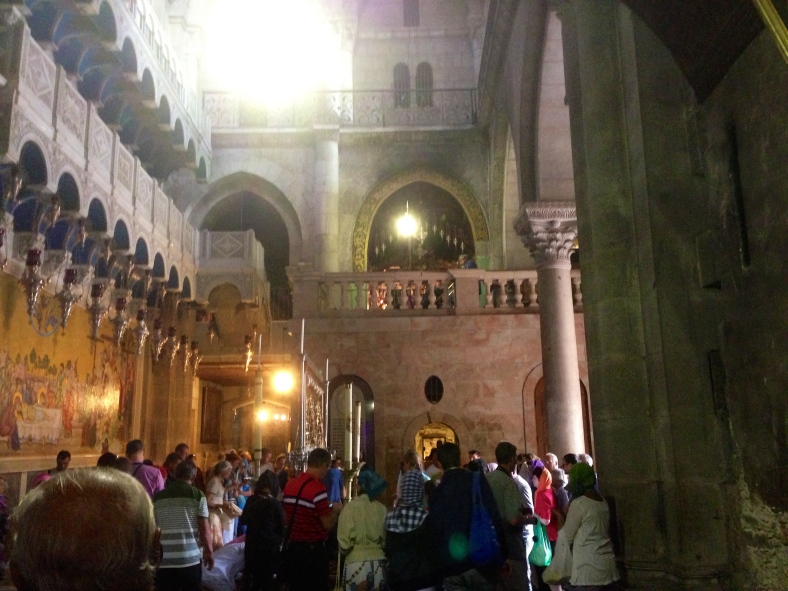 up top, on the right side, where the light is coming from under the arch, that is the top of Calvary 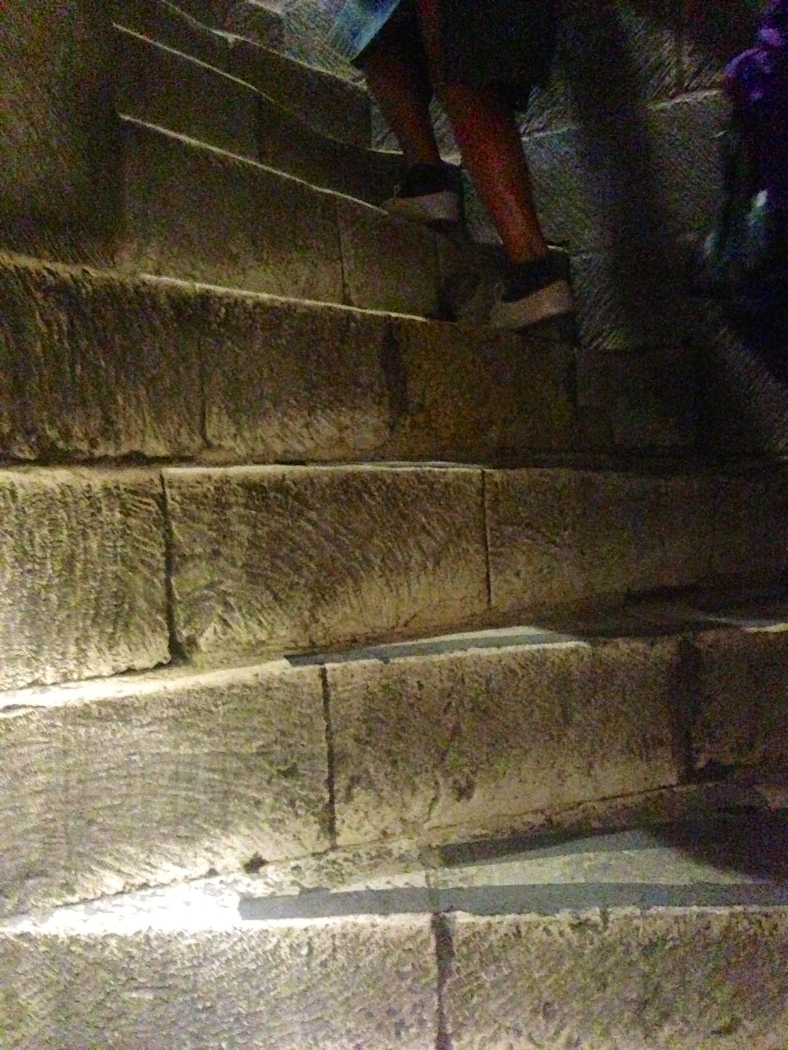 final set of (VERY STEEP) stairs up to Calvary

the altar, built onto the rock of Calvary. you can crawl under the altar and place your hand in the place that held the cross of the crucified Christ 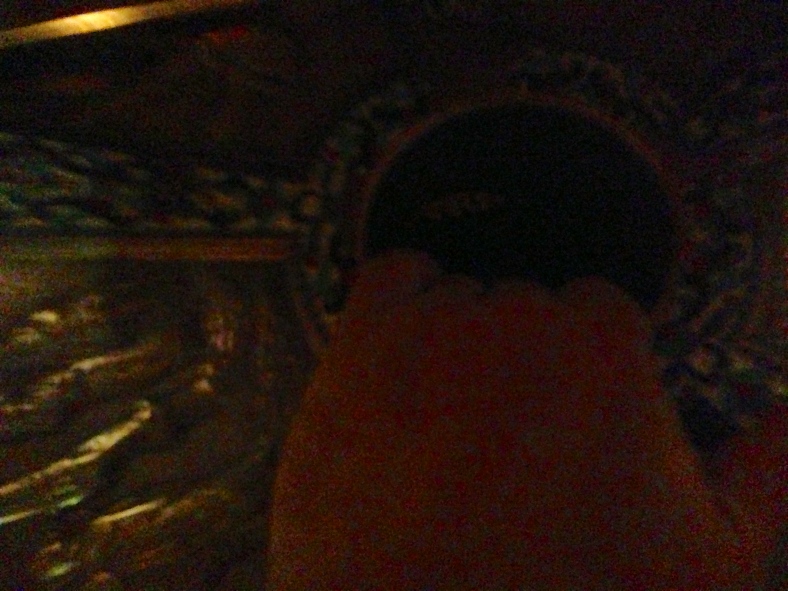 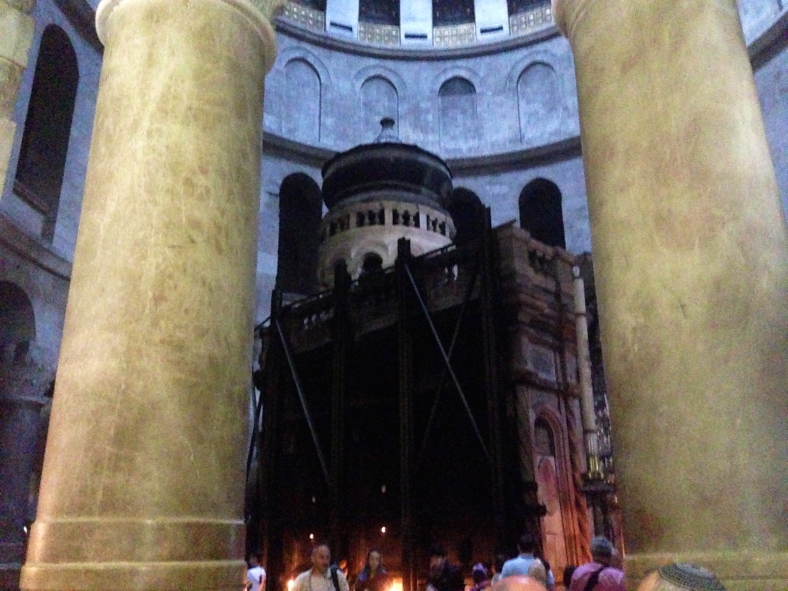 the tomb of Jesus 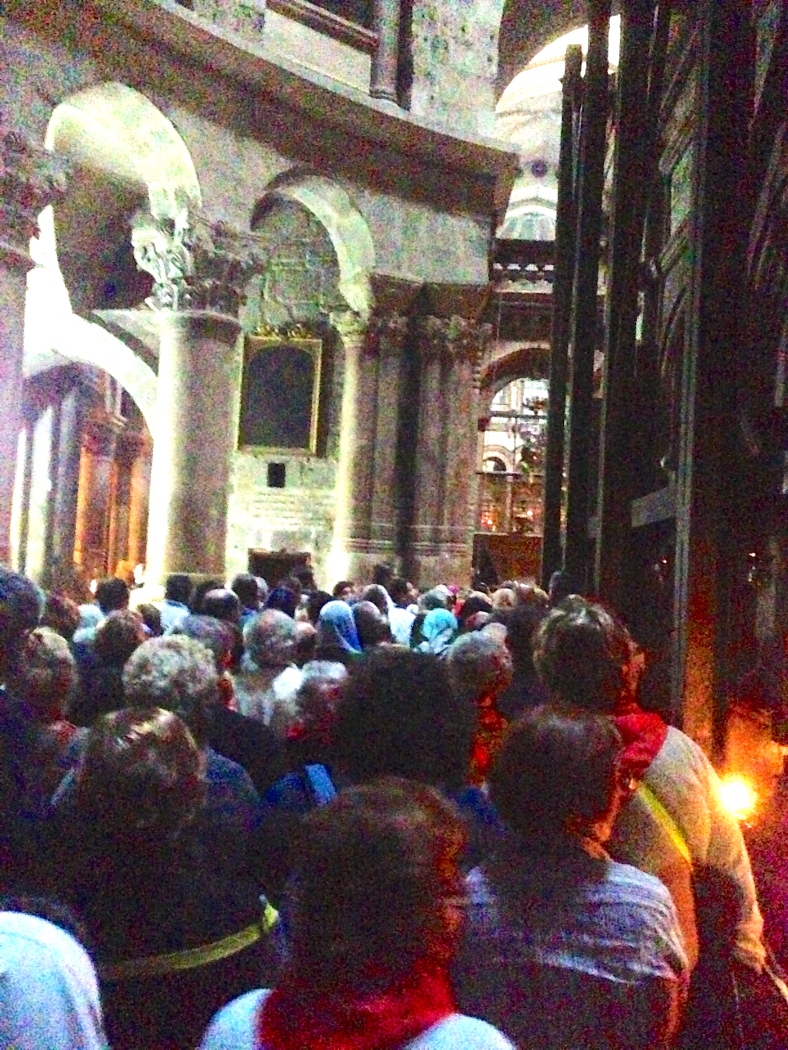 you have to wait in line to get into the tomb. sometimes the wait can be all day. other times, only a few hours. Aran waited only 45 minutes!

heading into the tomb . . . you have to stoop way down, almost to your knees

this is not THE place as the real tomb is about 5 feet below this spot. but it does represent the beautiful location where Jesus lay dead and then rose to life again!

just to give perspective, on the far left is the tomb, then come around the corner in the middle and there’s where Mary received her son’s body. and further to the right is Calvary. the garden is past the tomb and around the next corner to the right. it all happened within about a 300 square foot area.

It was a great day.  And perhaps the most two important things we discovered are:

TWO – Even if we don’t know the “exact” spot where Jesus may have been, it doesn’t mean he’s not there now.  Plus, by the presence of the Holy Spirit, he lives in our hearts, minds, souls, and bodies.